Electrification of a laboratory and nursing school in Litembo

In Litembo, the construction of a laboratory and nurses' school "Health College" is in full progress. Two dormitories, a workshop block, a kitchen block, a multi-purpose hall as well as two classrooms and two buildings for administrative purposes are being built. The reason for this new building is the urgent need for training in the medical field.

Licht für Afrika e.V. is actively involved in advising on the power supply for these buildings. Hybrid supply concepts combining solar and water power are possible. The nearby Homora Mill plays a decisive role in this context.

By retrofitting the Homora Mill for "multipurpose" purposes and by installing a generator the mill could supply the Health College with electricity. This means that the mill could be used to grind grain during its core hours and additionaly could act as an supplier of electricity outside of these hours. This seems to be an economical solution that could complement the basic solar power supply (e.g. peak electricity demand in the early morning and evening, power supply at night and feeding into the batteries of the solar system).

Various approaches are currently being developed and examined in order to provide the Health College with the best possible advice.

Floods during the rainy season cause damage to Mpapa Mill

The reconstruction of the Mpapa Mill supported by Licht für Afrika e.V. is in full swing. At the end of November 2020, the project coordinator Rehema Nsembele reported that the roof as well as the walls of the house have already been rebuilt. The plastering of the walls is planned as the next step.

The floods of the last rainy season caused damage to mills. In the project report for the period January - October 2020, Rehema Nsembele reports on the condition of the Mpapa Mill, which was damaged by floods in February.

The mill building was destroyed by the water masses, but the machines are still standing on their foundations and make an intact impression.

Now the work consists out of opening, cleaning and checking the machines by trained craftsmen. In order to be able to carry out the reconstruction, the Papa Mill community applied for financial aid for building materials from Licht für Afrika e.V..

Licht für Afrika e.V. has gladly complied with this application and in addition advises on the reconstruction, in case advice is needed. 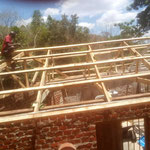 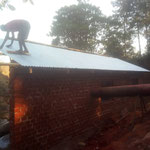 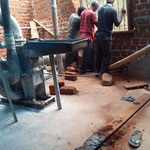 © Picture: "Rehema Nsembele" the reconstruction of the Mpapa Mill is in full swing.

The current Corona Virus situation is also affecting the activities of Licht für Afrika e.V. For several months we had prepared a promising stove project in the diocese of Mbinga (Women in Development). Although this project has now slowed down in its practical implementation, it is still being pursued. We are currently working on a detailed report to present the project, which provides economic support to the local women by producing clay stoves locally. The mobile stoves make household work easier, save wood and reduce smoke. For details on the project scroll further down.

We wish our friends and members particularly blessed and happy Easter holidays. We wish you and your families good health and a peaceful Easter. We all will get through these times and are looking forward to successfully implementing the planned projects together in the future.

- the board of Licht für Afrika e.V.

After delays caused by Covid-19, the training seminar was successfully held.

We will report shortly!

The most widespread cooking system is still the 3-stone, pot and firewood system. Women and children collect firewood, then the food is prepared. Due to the open fire and the smoke, they are exposed to harmful gases, which mainly damage eyes and the respiratory tract. A sustainable improvement of this situation is to be achieved by spreading the TICS through our planned training course.

We aim to have a total of 25 people - mainly interested women - trained by local experts. Under the guidance of Mrs. Rose Turuka, the women will learn how to build an efficient stove from local materials (clay and bricks). There are different types of stoves, mobile and stationary, with and without smoke outlets. The costs for this seminar, which will last several days, are approximately € 4.000,--, which will be covered by Licht für Afrika e.V.. The following goals are to be reached by further spreading the TICS:

- A reduced environmental impact due to a reduced need for firewood.

- A reduced workload which saves time for women and children.

- An increase in employment potential for stove builders.

Due to the virus pandemic, the training seminar is not possible at the moment as the Tanzanian government has issued a one-month temporary ban on all assemblies.

© Picture: "Jiko Matawi" Improved stoves made out of clay.